Posted on September 22, 2012 by emeBLOGsuPERadmin

For visitors interested in historic Wellington there are many buildings and other sites that date back to the time of its original European settlers. Several pleasant walking routes and heritage tours in the historic districts of Wellington are available that provide an interesting historical experience. 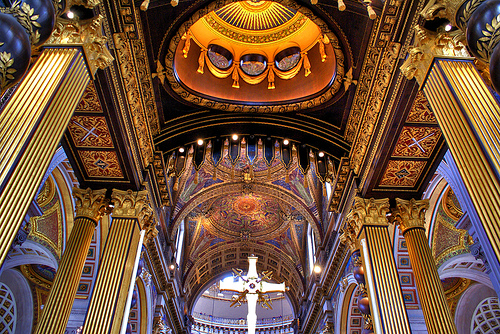 Foremost among the historical sites, is the first Anglican cathedral located in the historic Thorndon district of Wellington city; Old St Paul’s was built in the Gothic revival style popular in the 19th century and is one of the few examples of the genre in existence. What is special about the building is its soaring interior constructed entirely out of New Zealand timber, the beauty of which is enhanced by windows depicting biblical stories in shinning colours.

Adding to the historic vibe are the ensigns hung in the nave of the church of the Royal Navy, the New Zealand Merchant Navy and the second Division of the US Marine Corps dating back to World War Two. A touch of solemnity is added by the many memorial plaques dedicated to those who perished in World War One embedded in the columns and walls. A guided tour is the best way to hear the interesting stories associated with this old cathedral and the significance of some of its features which are inextricably linked with the history of Wellington and the country itself.

After the Diocese of Wellington was moved across the street to the new St Paul’s Cathedral in 1964, plans to demolish this historic landmark were thwarted when the New Zealand Government purchased it in 1967 and restored the cathedral. Although not a religious institution any more, the old cathedral is still very much a part of the social life of the city being a popular venue for social occasions such as weddings, concerts and other celebrations.
In one of the best locations in the city, within walking distance to many shopping, entertainment and business areas, Copthorne Hotel Wellington Oriental Bay is the ideal place to be based in for leisure and business guests. This Wellington city hotel offers well appointed contemporary accommodation and several guest services to make a stay here more comfortable. As one of the premier Wellington New Zealand hotels guests are also assured of some of the best facilities in town.
Tweet

Queenstown Ecotourism– For a Greener and More Invi…

Its location just below Australia, surrounded by the chilly waves of the Pacific Ocean and Tasman Sea gives the air of New…
READ MORE

Waiheke Island: There is something for everyone…

Home to one of the most contrasting landscapes in the world, New Zealand is unlike any ordinary island. Whilst the nation …
READ MORE

Agrodome Sheep Show and Farm Tour – A must visit p…

Agrodome Sheep show is a fantastic event which shows sheep of the most popular breeds in New Zealand. This is a very popul…
READ MORE

An Attraction with a Dash of Sweetness – Chelsea S…

Auckland, the largest urban area in New Zealand, is a place with many exciting features. Serving as the hub of New Zealand…
READ MORE

As Close As You Can Get To Nature – Routeburn Trac…

New Zealand, an island nation located on the Pacific Ocean, is a country known for its natural scenic beauty. Being one of…
READ MORE